The Scope of Commerce

The Nature and the Subject Matter of Commerce

Explain the nature and the subject matter of commerce

THE MEANING OF COMMERCE

The scope of commerce means areas of study covered in commerce. It comprises the study of all activities in the transfer (distribution) of goods and services from the producers to consumers.
Example of those activities include trade, transportation, banking, insurance etc
The scope of commerce covers the following:
COMMERCE is a branch of production which deals with the exchange of goods and services and all activities that facilitate the transfer of such goods and services from producer to final consumers.
DIVISION OF COMMERCE
Commerce is divided into two branches, which are:
Commerce Flow Chart
Draw the commerce flow chart
COMMERCE FLOW CHART. 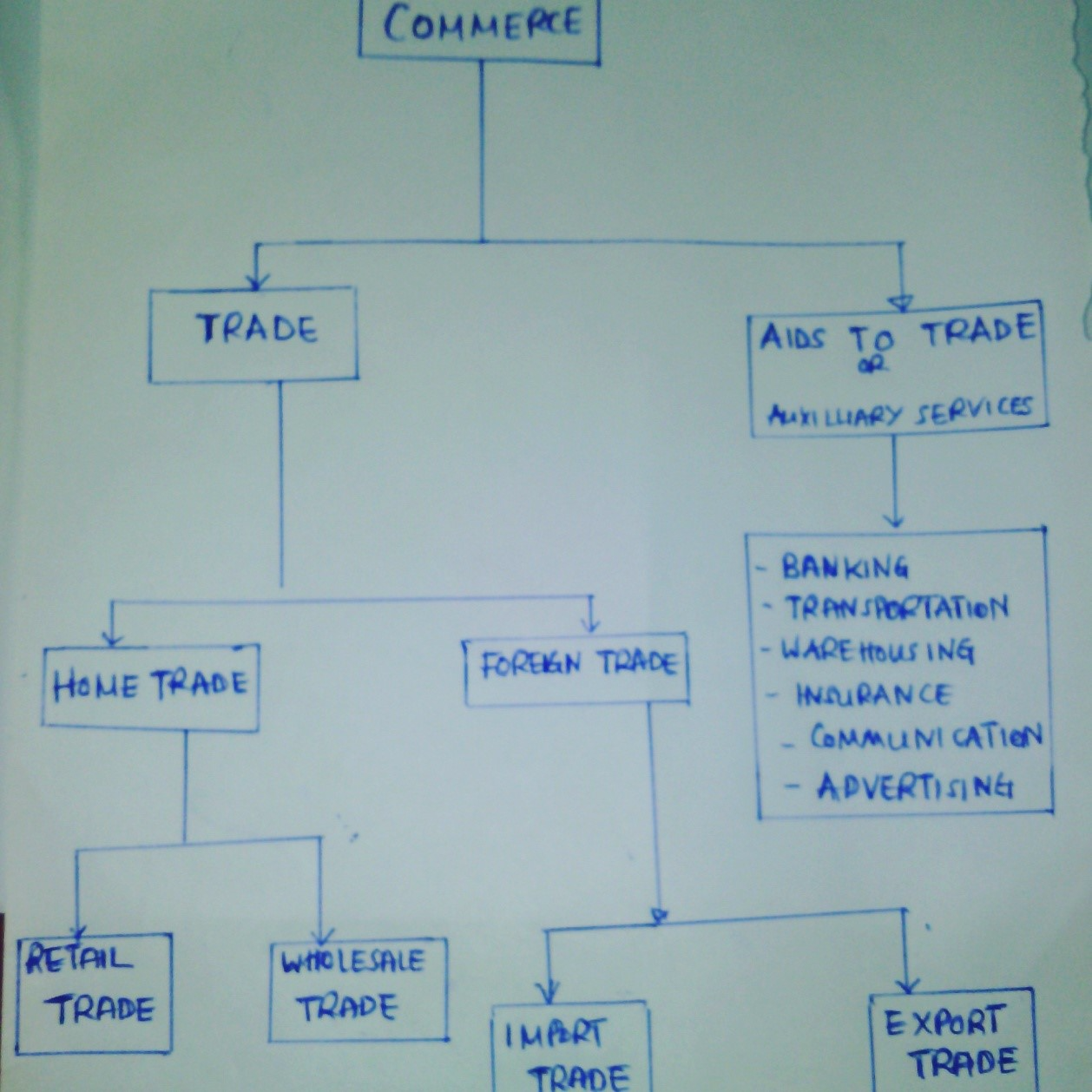 1).TRADE:
Refers to the process of buying and selling of goods and services, with the intention of generating profit. A person who engages in trading activities is known as a trader.
Trade is sub divided into two main branches, which are: a) Home trade and b) Foreign trade.
A. HOME TRADE
This is the buying and selling of goods and services within in a country. Home trade is divided into two main branches;- Retail trade and Wholesale trade
Retail trade: This is the buying of goods from producer or wholesalers and selling them to the final consumers. Retailer is a person who buys in small quantities from the wholesaler or producer and then sells it to the final consumer.
Wholesale trade: This is the buying of goods in large quantity from manufacturer or producers and selling them to other business men in smaller quantity at lower price. Wholesaler is a trader who buys in bulky (large quantities) from the producers and sells it in small quantities to the retailers or straight to the consumers.
B.INTERNATIONAL TRADE (FOREIGN TRADE)
International trade-is a trade between one nation and other nations. It is the exchange of goods and services across the national borders. For example, exchanging the goods and services between Tanzania and china.
International trade is divided into two types:
Export trade is the process of selling goods and services to other countries. For example, selling of Tanzania gold to China.
Import trade: is the process of buying goods and services from other countries. For example, buying of mobile phones from china and selling them locally in Tanzania.
2. AIDS TO TRADE
Aids to trade are all the activities which facilitate trade. Aids to trade make trade less difficult to carry out. Examples of aids to trade include the following:

c) Warehousing: Refers to the storing of goods so that they are made available when and where they are required. Goods which can be stored include crops, and perishable foods like fish, meat and fruits.

d) Insurance: a system of pooling risk together by contributing small sums of money to a common pool which in the long run, compensate the people or a person who suffers from actual loss. Examples of risks or losses are theft, robbery, fire, floods and accidents.

e) Banking: Helps to finance trade. It also provides a safe place to keep money, and provides means of payments and lending money in a form of loan to businesses.

Importance of Commerce in Everyday Life

Explain the importance of commerce in everyday life
IMPORTANCE OF STUDYING COMMERCE IN EVERYDAY LIFE.

It helps in the development of a country’s economy. Trade and aids to trade enable the goods produced to reach the final consumers, and the fore increase the production and the national income.

Difference between Commerce and Economics

THE DEVELOPMENT OF COMMERCE IN TANZANIA.

Commerce plays a fundamental role in the satisfaction of human wants. In primitive societies, the producers themselves were the consumers.Hence; they were compelled to provide themselves with foods, shelter and clothes. Under such circumstances, the question of commercial transactions or exchange of goods and services did not arise. But slowly heir wants started to increase in size and in number.

They were no longer able to satisfy all their wants, so they began exchanging he commodities produced with those produced by others. This exchange of goods for goods was known as barter system of trade.

However, barter trade could not persist for a long period of time due to the following demerits:

Lack of Double Coincidence of Wants: Barter transactions can be possible only when two persons desiring exchange of commodities should have such commodities which are mutually needed by each other. For example, if Fatma wants cloth, which Tully has, then Fatma should have such commod­ity which Tully wants. In the absence of such coincidence of wants, there will be no exchange. How­ever, it is very difficult to find such persons where there is coincidence of wants. One had to face such difficulties in barter economy because of which this system had to be abandoned.

Lack of a Common Measure of Value: The biggest problem in the barter exchange was the lack of common measure of value i.e., there was no such commodity in lieu of which all commodities could be bought and sold. In such a situation, while facilitating the exchange of a commodity its value was to be expressed in all commodities, such as one yard cloth is equal to ½ kilogram of potato etc. It was a very difficult proposition and made exchange virtually impossible. Now, with the discovery of money, this difficulty has been totally eliminated.

Lack of Store of Value: In a barter economy, the store of value could be done only in the form of commodities. However, we all know that commodities are perishable and they cannot be kept for a long time in the store. Because of this difficulty, the accumulation of capital or store of value was very difficult and without the accumulation of capital, economic progress could not be made. It is because of this reason that as long as barter system continued, significant progress was not made in the world anywhere.

Due to invention of money, barter system is not so much practiced, however it is still applied in some situation as:

HOW MONEY SOLVE HAS SOLVED THE PROBLEMS OF BARTER SYSTEM

Double Coincidence of Wants:
Money as medium of exchange has removed the double coincidence of wants. Under monetary system money is exchanged for goods and services when people buy things Goods and services are exchanged for money when people self-things, there is no necessity for a double coincidence of wants in the presence of money.
A man with the wheat, who wants to purchase oil, need not to find a person having oil and wants wheat. He can sell his wheat in the market for money and then purchase oil with the money thus obtained.

Common Measure of Value: Money has overcome the difficulty of common measure of value by acting as a standard of value. In a money economy the value of any commodity can easily be expressed in terms of money.

Store of Value: Money has removed the difficulty of store of value. Money is used to store the value (wealth) of goods and services. One can store one’s earning in terms of money without any difficulty.

Future Payments: Money has overcome the difficulty of future payments. Debts and future payments are stated in terms of money. There is no problem in receiving and making payments in future.

Sub Division: Money has solved the problem of sub-division of commodities as money is easily divisible. With the help of money one can exchange individual commodity of great value for a commodity of less value. Money has made it possible to buy goods of both high and low value. 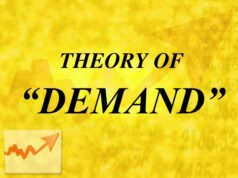