Light is a form of energy which controls the sense of vision.

Reflection of Light from Curved Mirrors 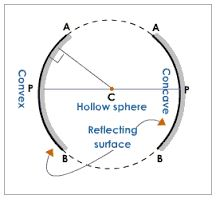 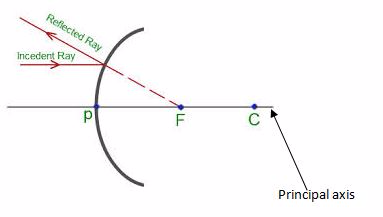 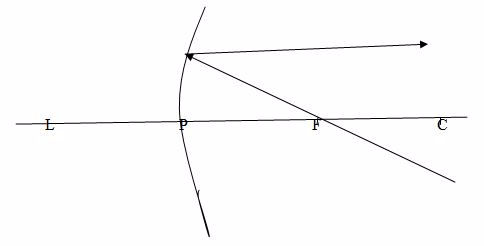 Case 3
When
a ray passes through the centre of curvature, C, which therefore
strikes the mirror at normal incidence, it is reflected back along its
original path.

Note: Concave mirrors have a real focus because light passes through the focus.
The formation of images by concave mirror tends to change as the position of object changes.
Case 1: Image (I) formed by a concave mirror when the object is beyond C.

Properties of images formed:
Case 2: The object is placed at C

Properties of image
Case 3: The object is placed between C and F

Properties of image formed
Case 4:The object is placed at F

Properties of image:
Case 5:The object is placed between F and P.

Properties of image formed:
Formation of images in a convex mirror:
Obviously,there isonly one kind of image formed when an object is placed at any position.
Properties of image formed by convex mirror:
Example 1
An
object 2cm long is erected 8cm infront of a concave mirror of radius of
curvature 10cm. By using a scale drawing, determine the position, size
and nature of image formed.
Data given
From this scale then
Thus,
Image distance, V = X
Image Height, H1=Y
The Focal Length of a Concave Mirror
Determine practically the focal length of a concave mirror
Focal length (f) is the distance between the principal focus and the pole. 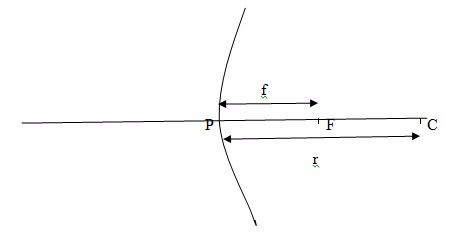 Convex and Concave Mirrors in Daily Life
Use Convex and concave mirrors in daily life
Curved mirrors are used as:
Question Time 1
Why is convex mirror used as driving mirror?
The convex mirror is used as driving mirror because it provides the wider field of view.
Question Time 2
Why concave mirror used as shaving mirror?
Concave mirrors are used as shaving mirrors because they form an enlarged image when held close up.
Refraction of Light
The Concept of Refraction of Light
Explain the concept of refraction of light
Refraction
of light refers tothe bending of light as it passes through two
different medium because the speed of light tends to change when
travelling from one medium to another. 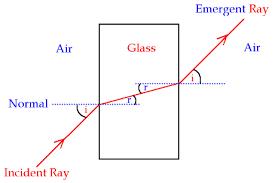 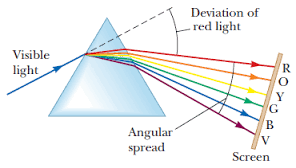 When colours of spectrum are combined, they form white light.
In order to combine colours of the spectrum, weneed two triangular glass prisms and one lens.
Impure spectrum:the band/patch of colours which overlap and are not seen clearly.
The rainbow:a
bow-shaped spectrum of seven colours of white light formed when white
light undergoes dispersion within the rain drops because water is denser
than air, so has a large refractive index.
Activity 1
A rainbow can be demonstrated as follows:
Spray some water into the air in a direction opposite to that of the sun.
Look
at the water shower while you face away from the sun. You will see the
colour of the spectrum of white light in the falling drops of water. The
spectrum so formed hasthe shape like a bow. So it is called rainbow.
There are two main types of rainbow:
Primary rainbow
This
is formed when light undergoes one or single total internal reflection
in the water droplets. In this type of the rainbow the violet colour is
on the inside of the bow while the red colour is on the outside. 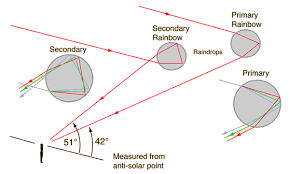 The Angles of Deviation and Minimum Deviation
Determine the angles of deviation and minimum deviation
Finding the refractive index (n) of glass by using the deviation of light in a prism:
Refracting angle of prism is A
Snell’s law
S in i/Sin r = N
Sin i= n sin r
Sin e’ = nsin i
From Geometry of figure
I = A- r
The total angle of deviation (s) is the angle between the direction orf the incident ray and the emergent ray.
Again from the Geometry Q is given by:
S= i+r’- A
When the deviation is a minimum (Sm) the passage of light through the prism will be symmetrical so:
I = r ‘and r = I’
This means that;
A + Smin = 2i = 2r’
Therefore;
Refractive index, n = Sin (A + Smin)/2
Sin (A/2)
Where
A = Apex angle ( angle of prism)
Smin – The angle of minimum deviation
A Simple Prism Binocular
Construct a simple prism binocular
Simple prism binocular 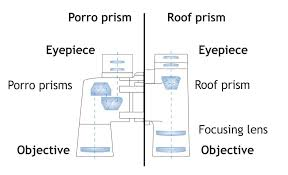 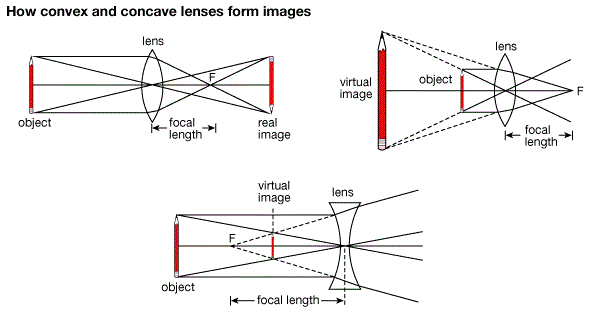 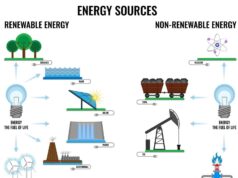 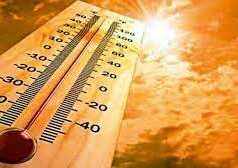 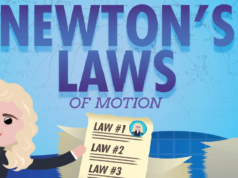